The Royal Horticultural Society’s Chelsea Flower Show certainly lived up to the hype. The crowds made it pretty clear that it is one of the best-loved spring events in London, and the stunning and varied gardens across the immense grounds were a feast for the eyes and spirit. 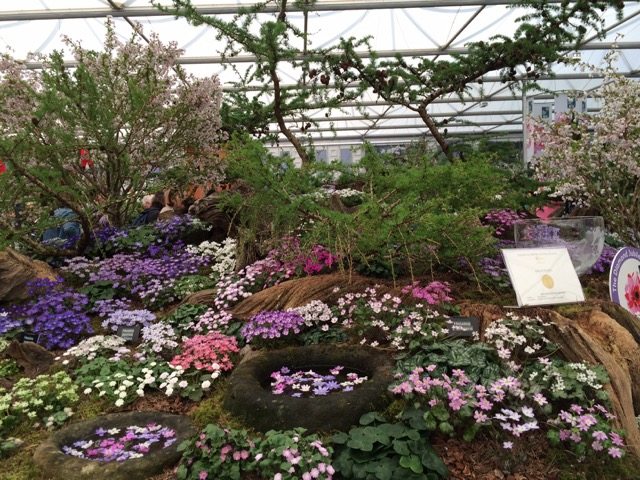 Laid out behind the vendors’ alley way in colorful squares outdoors, and inside the huge tent in the center of the grounds, were hundreds of gardens, each with a different theme. One of the most eye catching was not actually made up of live flowers, but was a massive carpet of knitted red poppies lining the steps that led from the Royal Hospital to the garden grounds. 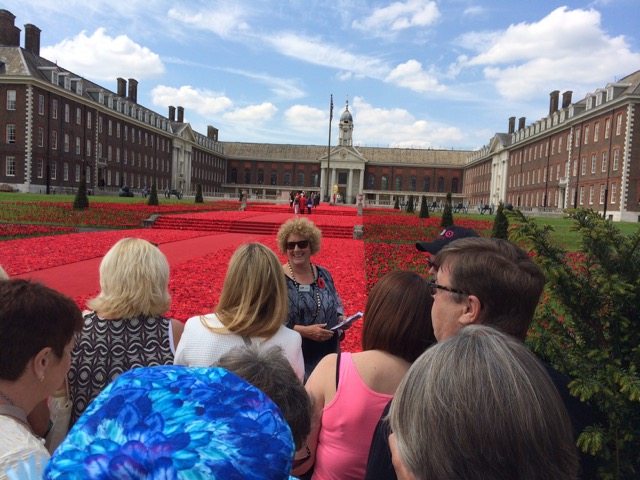 Pensioners decked out in red uniforms marched proudly along it, and mingled with the crowd, often graciously agreeing to have their pictures taken with onlookers. 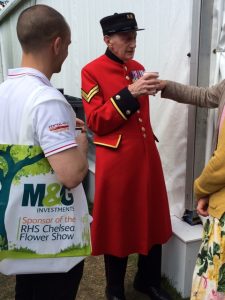 Who were these Chelsea Pensioners? The red poppies were a dead give-away to those of us from the British Commonwealth or the UK. Every year on November 11 we wear fuzzy red fabric poppies in our lapels to commemorate Armistice Day (Veteran’s Day in the US).

The poppy symbol comes from the poem “In Flanders fields where poppies blow, between the crosses row on row…” written on the battlefield in World War I. Every day, as a medical student and intern, I walked by a plaque in the entrance hall of Montreal’s Royal Victoria Hospital, memorializing that poem and the Canadian physician-poet who wrote it, John McCrae.

The Chelsea Pensioners are war veterans of the British Army, who live out their retirement at the Royal Hospital in Chelsea. To my astonishment, this red brick set of buildings had been commissioned by King Charles II in 1681 to care for those ‘broken by age or war.” That was sixty-one years after the Mayflower landed in Virginia and ninety-five years before the American Revolution! It was entirely possible that some of those Red Coats whom the Revolutionaries had fought spent their final years at the Royal Hospital Chelsea.

Then, unlike its busy urban setting now, Chelsea was a bucolic countryside by the Thames. It was meant as a place of respite for these proud soldiers, honored by their King. In fact, he commissioned the greatest architect of the day to design the place – Sir Christopher Wren, who also designed St. Paul’s Cathedral in London. 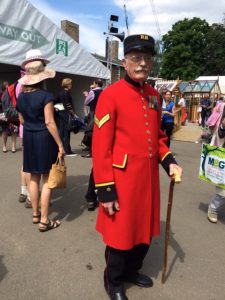 The men I saw did not seem broken by war – most veterans of World War II, they wore their uniforms with pride and held their heads high, chatting with the thousands of visitors to their home.

It reminded me how gardens can indeed help heal, even wounds of war. At the Walter Reed National Military Medical Center in Bethesda, Maryland, we are working with the US Navy, The Institute for Integrative Health, and the TKF Foundation to create a “Green Road” – a retrofitted branch of the Rock Creek that courses through this military base, to provide a place of quiet respite and contemplation for wounded warriors of US wars.

Hopefully when complete, that forest glen will have the same effect on Americans wounded by war, as the Chelsea Flower show seemed to have on the veterans of Britain’s wars.