It started out with informal phone calls from my daughter Penny, when she and her partner Dan began working on their latest project in South America – advising COANIQUEM, a children’s burn center in Santiago, Chile. COANIQUEM’s Founder and Director, Dr. Jorge Rojas had asked Designmatters, a United Nations NGO within Pasadena’s ArtCenter College of Design, to make the spaces less scary and more inviting for their patients.

Designmatters’ Director Mariana Amatulo, turned to Penny and Dan, as lead faculty for such South American Pacific Rim projects, to spearhead the initiative. After several phone calls from Penny asking my advice, we decided to formalize the relationship, and I became an official advisor, to help them turn COANIQUEM into a healing space.

The burn center serves over eight thousand child burn patients per year from across all of South America. It is a monumental task, as more than 7 million children are burned per year in Latin America, over seven times the burn rate in the developed world. More like a small village than a hospital, COANIQUEM includes a long-term care clinic, surgical outpatient services, physiotherapy, occupational therapy, a school, a chapel, and housing for the long term patients.

The Designmatters teams – usually two to three faculty and ten to twelve ArtCenter students, work closely with the NGOs and communities they are serving, to identify their greatest needs, and come up with design solutions together. It is truly social entrepreneurship working with, not just for the people who will benefit. The COANIQUEM project was named “Safe Niños” – to continue the theme that their first project, “Safe Agua” had begun.

I gave my first lecture to the ArtCenter student group shortly after they had returned to LA from their first trip to Chile. They had lived on site at COANIQUEM for two weeks, staying in the same dormitories as the families and patients. They had spent their days talking with and observing the day-to-day activities of all the staff, the patients, and their families, to identify their greatest needs and wishes for improvements.

At that point the students had barely formed their small group teams, and some had only a vague idea of their plans of action. So our interaction was mostly didactic – I gave my PowerPoint presentation on “Healing Spaces,” outlining elements of place that can stress or calm. When I came to the slide of me in Disneyland, on my 2008 behind-the-scenes-tour when I was researching my book Healing Spaces, the students nearly leaped out of their seats and begged me to please, please get them a behind-the-scenes tour of Disneyland too! At first I laughed at the idea, but then figured it was worth a try.

The design issues at COANIQUEM were much the same as those with which Disney’s Imagineers dealt when designing the theme park: how to move people through a space without being there to guide them every step of the way, and at the same time bringing them from fear and anxiety to hope and happiness. COANIQUEM had an entrance, long hallways, and many buildings that needed to be made easier to navigate and less threatening to the kids.

As soon as I returned to Tucson, I e-mailed Bruce Vaughn who, as VP of Disney Imagineering had given me the tour in 2008. He had since risen to Chief Creative Officer of Disney Imagineering, and enthusiastically arranged the tour for the group. He, and all the Imagineers we met were happy to apply their skills and talents to training the next generation to do good in the world through design. 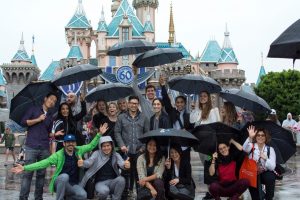 It was wonderful to watch the students drink in every word, some taking notes, many taking pictures, and all seeing the Park through the eyes of burgeoning young design professionals.