Election Stress 2016, and What to Do About It 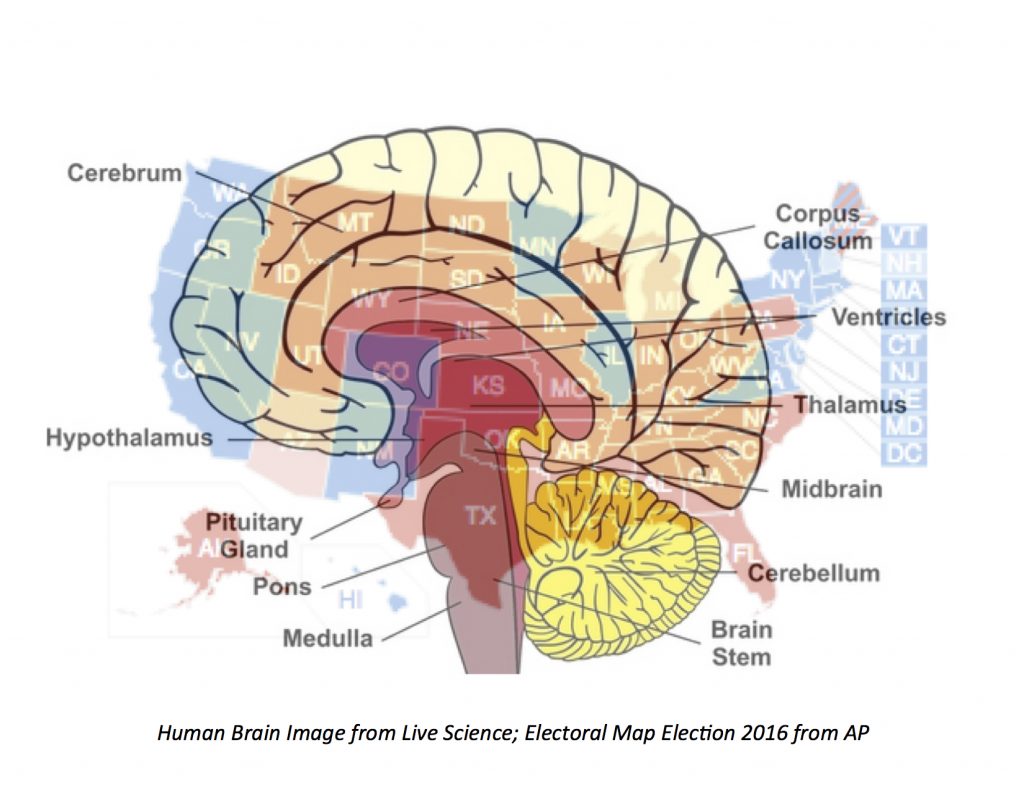 To my readers: sorry for being offline for a while – I was stressing over the elections – and apparently I am not alone. But the storm and fury of the election didn’t just cause us all to be stressed – one could argue that the brain’s stress response played a very large role in causing that storm and fury.

In 1881, in his book called “American Nervousness, Its Causes and Consequences,” George M. Beard said: “The chief and primary cause of …[the] very rapid increase of nervousness is modern civilization, which is distinguished from the ancient by these five characteristics: steampower, the periodical press, the telegraph, the sciences, and the mental activity of women.”

Sound familiar? Just substitute the words automation, the internet, the media, and cultural change, for some of Beard’s words, and we see that nothing has changed in over a century. Had my father been alive, he would have said: “Plus ça change, plus ça rest la meme chose,” – “The more things change, the more they stay the same.”

So why is this? The brain’s stress response is a finely tuned instrument, set to trigger at the slightest change in the environment. Change and novelty are very potent stressors for all animals, even down to the lowliest fruit fly. This is a good thing, as without that stress response, when faced with a danger in a new environment, we would not have the energy to fight or flee; we would not survive. But we are living in an age of unprecedented change – change that is present, or feared in the future; change in our immediate surroundings, or distant from us; change that we cannot escape because it looms large through the internet. There is war and terrorism. There are jobs lost through automation – jobs that will never be replaced because machines and robots are doing them now. There is social change, with the influx of immigrants and clashes of cultures. There is poverty, violence and discrimination. And yes, the “mental activity of women” apparently continues to cause stress for some.

What does this have to do with the election? People said they wanted change, but what the science of stress tells us is that what they were really seeking was familiarity – with an older, simpler time. Familiarity is an effective way of reducing the stress of novelty and change. Of course we all long for a simpler time, when we imagine that none of these stressors existed, or at least that they were there in smaller amounts. So it is natural to search for a way to go back in time, to when the landscape of work and the people around were familiar. It is natural too, to place all our hopes on someone who promises to take us there. When Walt Disney designed his theme parks in the 1950s, he designed a Main Street to reflect the Main Street of his childhood. But if you look at pictures of his hometown’s Main Street, it didn’t look at all like Disneyland. There were certainly no pretty awnings and definitely no castle. It was the town he had dreamed of – a place that existed only in his imagination.

One very primal, almost reflexive way to lower the stress response is to act on it – express it, vocalize it, attack the perceived trigger, to try to get rid of it. That’s the “fight” part of the fight or flight response. This approach was unfortunately all too rampant in the lead-up to this election. But while this may feel good to the do-er in the moment, it is counter-productive in the longer term. It creates a vicious cycle that amplifies stress, especially if the perceived trigger fights back. And the stress is amplified even more if those attacks are launched relentlessly on a massive, society-wide scale, as they were throughout the election period.

But there are better ways of reducing stress – ways that don’t hurt others and ourselves, and which do ultimately get the desired result – a place of safety and comfort for all. How stressed one feels depends on the balance between the load of stress and the control we have over that stress. If you are in a high demand, high control situation, you feel stimulated – think pilot flying an airplane. In a high demand low control situation, you feel stressed – that’s the rest of us in the back of the plane when it gets bumpy. So, if the election results are making you stressed, one way to productively manage that stress is to do something to take control. Of course, you can never really be in control. But you can fool your brain into thinking that you have some control, and that will lower your stress response.

I have felt this way at a few critical times in my life when events so monumental stopped me dead in my tracks – 9/11 was one. When faced with stressful events that you can’t change, you can resolve to do whatever you can in your own sphere of expertise, to take control. If you are a teacher, teach; a builder, build; a driver, drive; a cook, cook; a healer, heal. That will give you a sense of control over the situation and doing so will lower that feeling of stress. I write and do medical research. I am already feeling less stressed just writing this, so thank you, dear readers, for helping me out!

One even better way to lower your stress response is to do those things that you do best, and do them for others. If enough of us apply our own special talents to doing good, then perhaps the cumulative good will have a chance of canceling out the bad, while lowering our collective stress in the process.

That may sound naïve, but it works. Love and compassion are actually more effective ways to counter the brain’s stress response, by activating all those positive brain hormones, nerve chemicals, and brain pathways, than is trying hard to reduce stress. When I asked the Dalai Lama whether he uses meditation to reduce stress, he shook his head. Stress, he said, was not a word in the Buddhist tradition. When I asked, why then does he meditate, he answered, compassion – love – it’s that simple.

The Dalai Lama is not the only spiritual leader who has preached this gospel. Having compassion for people on both sides – each struggling with their own stresses – change, job loss, new culture, loss of home or homeland, fear, discrimination, violence, poverty, and on and on – is one of the best ways to lower your stress response. By doing so, hopefully we will all find a new way forward, to work together to find solutions on common ground, to build instead of to tear down, and to do it together, with respect for the fears and stresses that motivate us all. That is what will make this country truly great again.

Maybe then we can all have our castles at the end of Main Street. After all, the United States was founded on these principles – that we all have certain unalienable Rights, and these include the pursuit of Happiness.