The “Green Road”: Healing wounds of war with nature, Part 1

After the young service woman in full Navy camo cleared me for base access at the Visitor’s Entrance check-point, she pointed to the familiar white art deco tower of what used to be called the Bethesda Navy Hospital.

“Just head up there, turn left and head straight to the USO. It’s a long walk,” she cautioned.

As I started my trek up the hill I felt anxious, not knowing exactly where I was going. But as soon as I saw a small printed sign by the edge of the road festooned with a green ribbon, I smiled. Finding my way to the site would be like a scavenger hunt!

I was at the Walter Reed National Military Medical Center military base in Bethesda, Maryland, for the opening of the “Green Road” Project. It had been 5 years in the making. The goals: to retrofit a branch of the Rock Creek that flows through the base, make it ADA accessible for wheelchairs and anyone with difficulty walking, and create a healing forest glen where wounded warriors and their families could gather and find respite while being treated at the many hospitals on base. 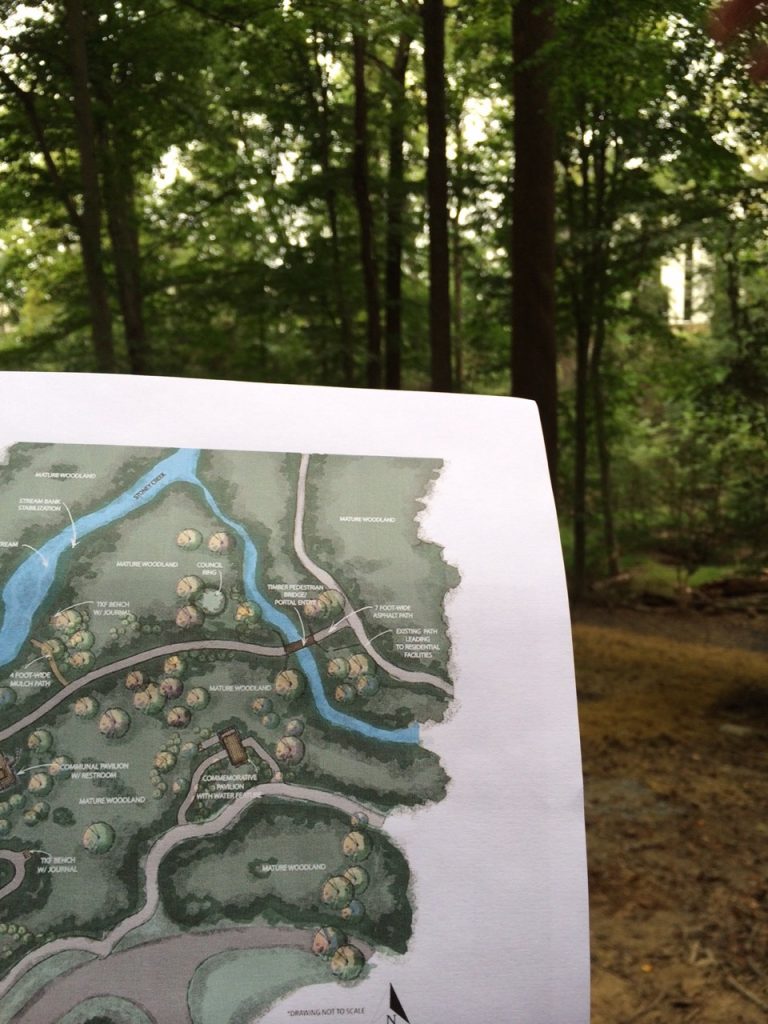 I had been involved in the project from the start, having advised the CEO and founder of the TKF Foundation and his Board on the most impactful way to dispose of the Foundation’s funds as they searched for a way to sunset it. Up until that time the Foundation had built hundreds of healing, sacred nature spaces throughout Maryland and the mid-Atlantic region. They wanted to use their remaining funds to build a smaller number of gardens that would have greater national impact. They had asked me, and a group of experts, to advise them on how to accomplish that.

I had been working with Capt. Fred Foote, a retired Navy doc, at the then Bethesda Naval Hospital. As he worked to bring holistic mind-body integrative treatments into the armamentarium of military medical care, he dreamed of creating a healing forest glen as a sanctuary for service personnel and their families. It was a no-brainer, I thought – put him together with TKF to do it. Building this nature sanctuary at the nation’s flagship medical center – the one where Presidents are treated – would be sure to have tremendous national impact.

As I picked my way along the base’s busy urban street, past the hospital’s main entrance, a continuous stream of trucks and cars passed by, leaving behind their smells of exhaust and diesel. Loud machinery noises filled the air – constant humming emanating from whole buildings filled with heating and air conditioning equipment for the base; jack-hammering and clangs of construction equipment. The sidewalk was sloped and there were many streets to cross. I couldn’t imagine how anyone in a wheel chair or on crutches could navigate this route without stress, twice daily to and from their living quarters to the hospital.