The “Green Road”: Healing wounds of war with nature. Part 2 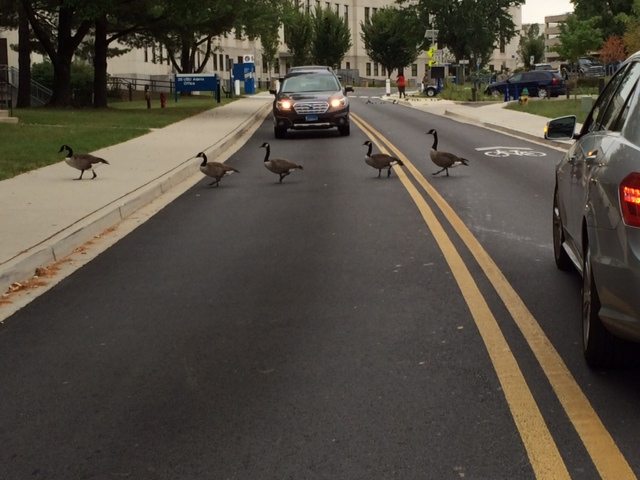 The first sign that I was getting close to the “Green Road” was a view of a grove of trees and a flock of geese staidly crossing the street nearby. The urban noises began to fade as sounds of crickets and birds gradually replaced them. It was like the “slow fades” between lands in a Disney theme park. Soon, I was surrounded by trees as I entered an entirely new world. 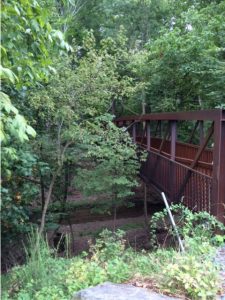 The gently sloping paved switchback path led to an old iron bridge across the Rock Creek. As I crossed the bridge over the pebbled lazy stream below, I could see deer grazing among the trees. The leaf-strewn path led to an open area where large granite rocks had been placed in a circle – inviting visitors to gather and share songs and stories. Farther on, beside the stream, was one of the signature large oak benches that the TKF Foundation places in all their gardens. There, visitors can contemplate in peace, or write their thoughts in a waterproof journal placed underneath the seat. Up on the steep hillside above the stream was a simple covered wooden structure, held by a low dry rock wall. A single large slatted wooden bench at its back, welcomed one to sit in quiet and remember loved ones lost in battle. 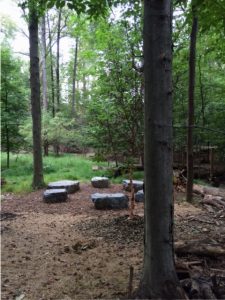 The path led to a tiny wooden cabin whose roof shaded a wooden picnic bench with iron joints salvaged from the World War II battleship SS Diamond Head. A crowd of civilians and military personnel from the Army, Navy and Marines were gathered there, listening as the sweet voices of two women singing America the Beautiful filled the clearing. Photographers and TV camera crews stood behind the rows of people on folding chairs. After speeches and thank you’s from dignitaries, including Capt. Fred Foote, the Base Commander, Senator Barbara Mikulski, and the funding partners –The Institute on Integrative Health, and TKF’s Tom Stoner, the ribbon cutting officially opened the site (a green ribbon, of course!). We were then free to wander in the grove before retiring to the USO lounge for a barbeque lunch.

I had wandered the grove myself on the Saturday before the event, picking pebbles by the stream, sitting on the benches listening to the forest sounds: the water swooshing over rocks, the wind in the trees, the birds’ cheeping, and the crunch of leaves underneath my feet.

It was indeed a healing place – a place of peace amidst the clatter and fray of the outside world; a place to heal the wounds of war.