I know I shouldn’t admit this, but I love ice cream. Not exactly your top health food, but at least it does contain calcium. I rarely eat it at home, and reward myself when I travel, with a scoop of the local specialties. In Italy, there is gelato; in France crème glacée – each with very different textures and flavors than American ice cream. 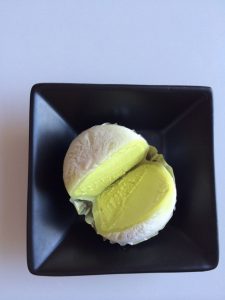 I first tasted green tea ice cream at a street vendor’s cart in Shizuoka, Japan, and have since had it at pretty much any sushi restaurant that serves it. I always thought that “mochi” ice cream – a sweet confection of ice cream wrapped in pounded sticky rice, was also a Japanese specialty, but it turns out it was invented by a Japanese American, Frances Hashimoto, right in L.A.’s Little Tokyo, where I first tasted it – of course, filled with green tea ice cream.

As a child, my favorite flavors were vanilla, orange, and banana. It was a thrill to hand over our coins in exchange for a sugar cone, when my sister and best friend and I were first allowed to walk, alone, the five blocks to our local ice cream parlor in Montreal. On a recent trip back, I visited the place. Its name is changed and, like the whole area, it is much gentrified, with sidewalk tables and flavors like “Lavande et Miel” (Lavender and Honey) – divine, but not my simpler childhood memories.

In Burlington, Vermont they call soft ice cream “cremees,” and it is impossible to be in that state without tasting maple cremees in each locale, and comparing them – the equivalent of a pub crawl for beer, but in this case an ‘ice cream crawl.’

And then there is Ben and Jerry’s. Shockingly there is no plaque commemorating the site of a former gas station in downtown Burlington, where the boys first started scooping their product. It is just an empty lot. However, on Church Street, Burlington’s walking promenade, a second street sign sits atop the one for Cherry Street, on the corner of which the Ben and Jerry’s shop is situated. It reads “Cherry Garcia.”

This year, when we visited the Ben and Jerry’s Factory in Waterbury, Vermont, on a July weekend, the place was crowded with families with young children, teenagers, and older adults of many nationalities all waiting for their tours. In summer these are spaced every ten minutes, from 9am through to 9pm closing. I could hear many languages besides American, Brit, and Australian English, including French, Chinese, and German. This and the world map in the entrance lobby showing all the locations where Ben and Jerry’s ice cream is sold, fit with my having had a cup of the stuff at Australia’s Sydney Opera House, and seeing it in a vending machine at Heathrow Airport in London. 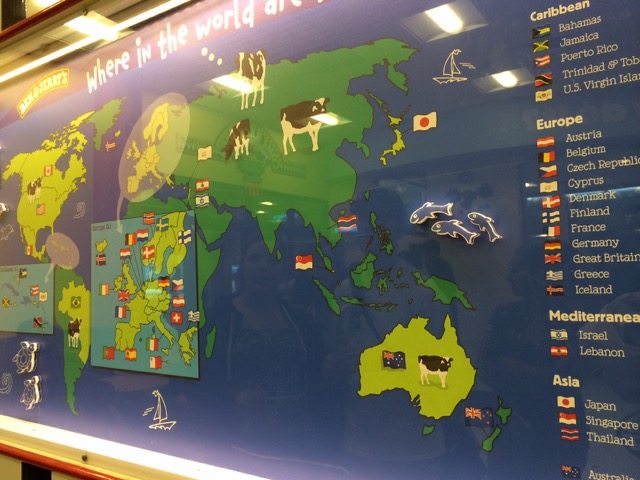 What is it about ice cream that speaks to so many people around the world, young and old and everything in between?

I posed this question to Jerry Greenfield when we met at a wedding last year in Burlington, Vermont. The bride’s mother was a long-time friend of Jerry’s and Ben Cohen, and had helped them out at the shop almost from its inception, even naming and perfecting some flavors. Jerry’s wedding gift to the young couple: he and his son were on hand to scoop the ice cream he had provided for the guests. The bride and groom were from Vienna, and their many Austrian friends were thrilled at the chance to take selfies while being handed scoops from Jerry himself. And truth be told, so was I.

I shared with him my personal ritual when I lived in Washington, DC, of eating a chocolate-coated Cherry Garcia while walking under the arching cherry trees in full bloom. It was often cold at that time of year, but the experience always boosted my spirits.

We talked about how smell and taste are the most ancient and direct routes to the brain’s emotional and memory centers, triggering release of pleasure chemicals in the brain’s reward centers. Jerry’s wife, a psychologist, and I continued the conversation after he and his son had to leave to tend to the ice cream for the wedding reception. It seems there is a rather narrow temperature window between frozen too hard and soupy melted, when the flavor and texture of ice cream is just right. The science of ice cream creation clearly involves both chemistry and sensory neuroscience.