Shortly before Susan Sebastian died of a life-long illness, she had told her mother, Elise Braun, that she wanted original art placed in every room in every hospital in Vermont, so tired was she of looking at the bare walls. At the suggestion of Elise’s cousin, Alex Ryley, a New York City elder law attorney who had read Healing Spaces, she and Foundation Manager Gil Myers, used the book as an inspiration and guide for selecting art throughout the seven years of the project. 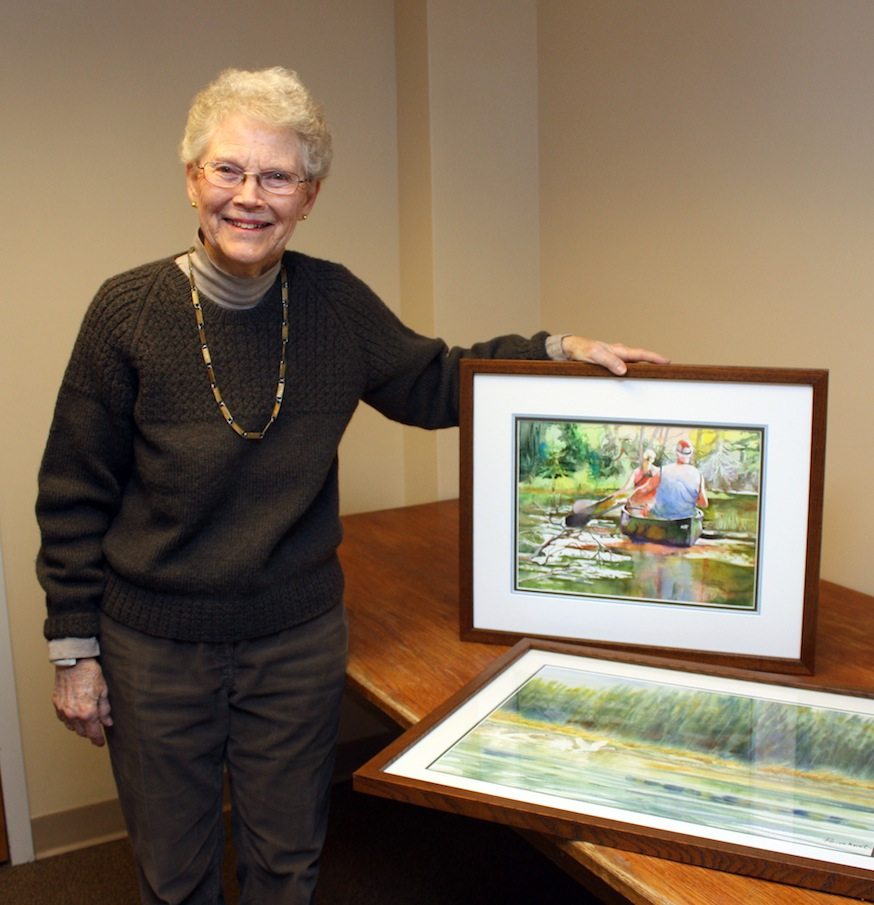 Elise Braun was too ill to attend the Art Center event. When I spoke (click HERE to watch the video), I thought she was listening via Skype, but it turned out the Skype connection failed. She had to wait until the day after the event to hear about it in person through Gil Myers and her friend, Deb Clark, a nurse. Both shared how happy Elise was to know that her work was complete. In Clarke’s words,

It was a treasured time (as Elise) listened, looked at photos, and asked questions with a smile from ear to ear.

This final installation was the most celebrated. Bennington Hospital really outdid themselves. How great (it was that) people heard about Dr. Sternberg’s work that inspired Gil and me.

Braun died peacefully just a few days later. Like a marathon runner, she had pushed herself through to the project’s finish.

When I heard of Elise Braun’s passing, I was reminded of one of my first patients when I was a young medical student. My patient who was near the end, seemed well enough when I bid her good-bye for the weekend, and told her that I would see her on Monday. She smiled quietly and said she was looking forward to seeing her son that weekend, and thought that this would be her final good-bye to me. When I returned on Monday, her bed was empty and the nurses told me that she had died quietly and at peace shortly after her son had visited. This was my first experience with a patient waiting to die until a loved one visited or a special event in their lives was accomplished – a wedding, a birth, a graduation.

Many healthcare professionals have had such experiences. I have had them in my own family. When my mother was dying of cancer, she waited for my aunt, who with my uncle were driving back to Montreal as fast as they could from their winter home in Florida. My mother had slipped into unconsciousness before they arrived and we all thought they would get there too late. But when my aunt – my mother’s sister, entered the hospital room, my mother raised herself up on the bed with all her strength and called out my aunt’s name. Then she slipped back into unconsciousness and died a few days later.

I couldn’t help but feel that Elise Braun waited for her life’s mission to be complete before allowing herself to slip away. Gil Myers and Deb Clark both thought that it was so. I would like to think that my words and my book played a small part in helping her to achieve that mission, which gave her a sense of peace and calm and fulfillment that her job was done.

That would be the greatest satisfaction any author could hope for.