I had flown to London to attend the Templeton Prize Ceremony honoring Rabbi Lord Jonathan Sacks – former Chief Rabbi of the United Hebrew Congregations of the Commonwealth. In the Jewish faith, there is no Pope. Each congregation’s Rabbi is fairly independent. But among Conservative Hebrew congregations across Britain and its former colonies – the Commonwealth, the Chief Rabbi is about as close to a political faith leader that there is.

I was invited to attend the ceremony because I had been a Templeton Prize judge several years before. Established by Sir John Templeton, of Mutual Fund fame, the Foundation is “a philanthropic catalyst for discoveries relating to the Big Questions of human purpose… by informed dialogue between scientists, philosophers and theologians…and the public at large.” The Prize is meant to be something of a Nobel Prize for highest achievement in those endeavors. Although my tenure as a judge was over, I wanted to attend to honor this important event.

I had first met Sir John when I was invited to speak at a Templeton Foundation Board meeting some twenty years before, and had stayed connected to the Foundation on and off through the years. After Sir John died, his son Dr. Jack Templeton took the helm. A pediatric surgeon at the Children’s Hospital of Philadelphia, his focus on hard scientific outcome measures matched mine, and I felt an affinity to him and his wife Pina, also a physician.

The only other Prize ceremony I had attended was the one honoring Archbishop Desmond Tutu – a raucous, joyous celebration of that man’s monumental achievements. I first suspected Dr. Templeton’s serious illness when he did not appear at that ceremony. He died just a few of years later of a brain tumor. His daughters Heather Dill and Jennifer Simpson then took the lead at the Foundation and its Board. 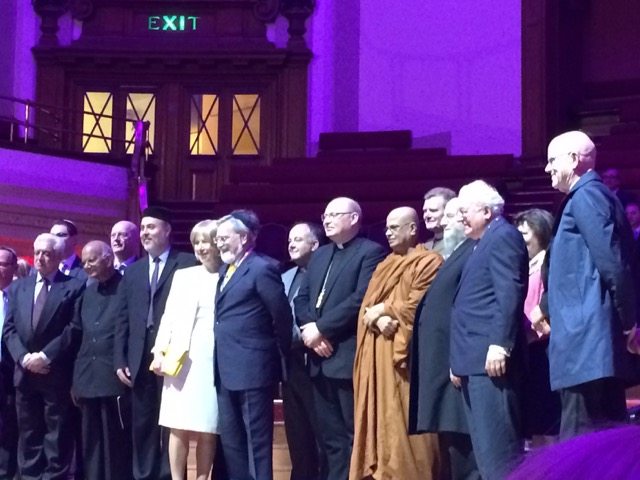 And now the Foundation was about to honor a leader of the Jewish faith – particularly meaningful at this time of religious strife. During the ceremony, religious leaders in the audience were invited to the stage. It was an impressive sight, with clerics of every possible denomination represented: Jewish, of course, and Catholic, Protestants, Muslim, and many others, all dressed in their faith’s robes and head coverings. If ever a picture could say a thousand words this one did: we are all in this together and we have a common purpose to unite in peace and understanding.

Rabbi Lord Jonathan Sacks’ words amplified that image. He recounted that as a student at Cambridge he had visited the U.S. and was inspired by two seminal encounters to become a Rabbi and to take an active role in disseminating his values to an increasingly secular academic community. “The Rebbe [Lubavitcher Rebbe, Rabbi Menachem Mendel Schneerson] challenged me to lead. Rabbi Soloveitchik challenged me to think.” he said.

He took up the challenge and through over twenty-five books, many scholarly articles, radio and television broadcasts, public speaking, and web writings, became an outspoken religious entrepreneur, not proselytizing the Hebrew faith but inspiring unity amongst religions towards peace. His central message: “appreciation and respect of all faiths…recognizing that the values of each is the only path to effectively combat the global rise of violence and terrorism.”

This is the essence of the Templeton Prize – to reward those who go beyond scholarship and use creative entrepreneurship to make the world a better place. This was the key characteristic of the achievements of all its previous winners.

The ceremony ended with two choirs – a Hebrew men’s choir, “Shabbaton”, and a children’s choir, rendering “Oseh Shalom” – a Hebrew song of peace. The children’s sweet young voices provided a counterpoint to the deeper more mature ones, and imbued a spirit of hope.

At the end of the ceremony, Rabbi Lord Jonathan Sacks was invited to join the choir, and did – taking the microphone amongst the others and singing with a gusto and joy that reflected his lifelong commitment to inspiration, faith, and peace. [See the video HERE]