A few days after I returned to Burlington, Vermont from the Susan Sebastian event at the Southern Vermont Art Center (Part 1, Part 2), I sat down for coffee with Gil Myers, a retired attorney who had set up and now manages the Foundation. He had been a longtime friend of Susan Sebastian’s mother, Elise Braun. He had suggested we meet at a coffee house across from the Court House in downtown Burlington. A small man with white hair and twinkly eyes, he carried a gnarled wooden country walking stick, much like Gandalf or Sam Gamgee might have done in Lord of the Rings. 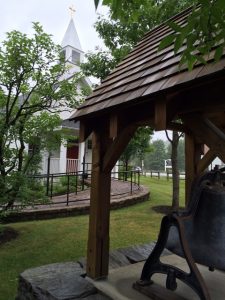 Self effacing and humble, he downplays his central role in carrying through Susan Sebastian’s dying wish, to install original art in every patient room in every hospital in Vermont. At first Elise Braun was the moving force, he recounted, but after they had completed placing art in three hospitals, Elise fell ill and Myers was the one who carried the project through to its completion. Nonetheless, he insisted throughout that it was not his but Elise’s achievement – he was simply the instrument who completed the task. As he told me – “that’s what lawyers do.”

Myers shared with me more of Elise Braun’s character and spirit. “She was such a vital person,” he recalled, “she radiated vitality and energy.” At one time Elise, her husband, and her daughter Susan had lived in Stowe, Vermont. They used to attend an Episcopal Church about two miles up the Mountain road from the Village, near the Stowe Ski area. 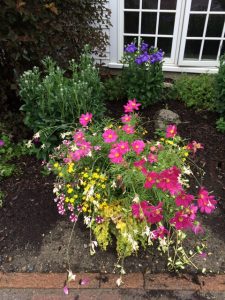 The day I went to visit, the mist alternated with rain, and the little garden bloomed bright. Elise had noticed that many of the older congregants had difficulty getting to church. So she went to school and trained to become an Episcopal Deacon, in order to minister to those unable to attend. As much as book-learning and helping others, she loved outdoor sports – she and her husband used to figure skate in winter and hike in summer.

Myers too was a sportsman – a fly fisherman. I asked if he had stopped by the Orvis store and headquarters in Manchester, Vermont, just a short drive from the Southern Vermont Art Center where the Susan Sebastian event had been held. He smiled and launched into a wonderful story about a friend who had taught one of the Rockefeller women fly-fishing. In thanks, she sent the friend a silver-handled hand-made bamboo Orvis fly-fishing rod, engraved with his name and thanks for having taught her the sport. Now that’s a great fishing story!

Myers is now occupied with disbursing the remaining Susan Sebastian Foundation funds to help the Vermont Respite House – the only one of its kind in Vermont, adding artwork to their patient rooms. The work continues even after Susan Sebastian and Elise Braun’s passing.

When so much bad is happening in the world, it is heartening to know that there are still many pockets of good.